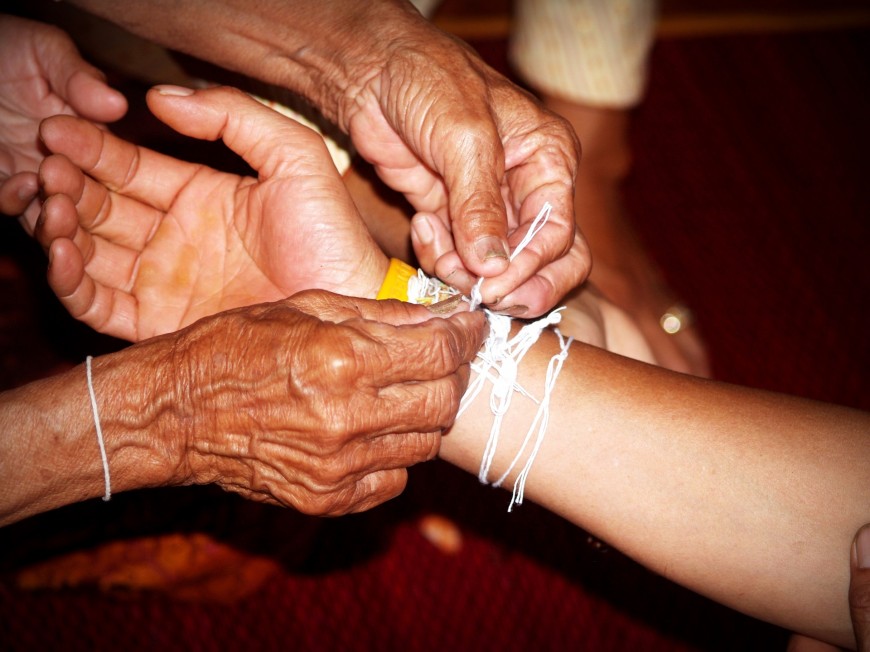 Baci is an important ceremony in Lao culture, a ritual to celebrate important events and occasions, like births, marriages, monkhood, travel, or ill health and to honour guests. Baci can take place all year, any day before noon or before sunset.

The observance of Baci as a spiritual ceremonial event was prevalent in Laos before Buddhism, when the people of Laos practiced mainly animist traditions. As a result, Baci is not associated with a specific religion. The ritual of Baci involves tying strings around a person’s wrist to preserve good luck. The ceremony is known as Su Kwan ສູ່ຂວັນ, “calling of the soul” and is the belief that Baci is invoked to synchronise the Kwan spirits or “components of the soul.”

The Baci is a longstanding Lao tradition. The communist regime attempted to suppress ceremonies and Buddhist festivals after 1975, but even the Lao revolutionary leader, Khaysone Pomvihan consulted monks, maintained a shrine, and prayed to his parents.

Ancient belief in Laos is the human being is a union of 32 organs and that the Kwan watch over and protect us. Kwan are components of the soul, but a bit more abstract in meaning. Kwan are described as: “vital forces, harmony and balance of the body, or part of it”, “private reality of the body, inherent in the life of human and animals from birth,” and “vital breath”.

It is of utmost importance that as many Kwan as possible are kept together in the body. Changes in Kwan are considered the cause of illness, so the Baci calls Kwan back to the body, secures them in place, and re-establishes equilibrium.

The Pha Kwan is an elaborate arrangement of a dish or bowl, in silver, prepared by the elder ladies of the community. From the top sprouts a cone or horn made of banana leaves, with flowers and white cotton/silk threads tied to a bamboo stalk.

The decoration with flowers is of different flower types with specific connotation of ok huck (symbol of love), dok sampi (longevity), dok daohuang (cheerfulness/brilliance)
The threads are long enough to wrap around your wrists. These are attached to a bamboo stalk and give the impression of a banner.

The Pha Kwan is placed in the center of the room, with the Mor Phon facing it. The Mor Phon is a village elder, an ex-monk who officiates the ceremony, chanting and calling the Kwan.

The ceremony involves preparing the Pha Kwan or flower trays for people to gather in reverence. Around the base is food for the Kwan. The food may be hard boiled eggs (symbol of fertility), fruits and sweets (symbol of coming together of several parts, and forming community), bottle of rice whisky for purification, a boiled chicken for divination, bananas, and khaotom-boiled sweet rice wrapped in banana leaves.

The youngest assembled pay obeisance to the elders present in the ceremony. Every one touches the trays of Pha Kwan as a mark of respect, amidst recitation of Buddhist mantras by the Mor Phon.

Buddhist deities, animist deities and spirits are invoked amidst the chants for the return of Kwan (souls) from wherever they are back to the body to ensure equilibrium. It is said to be a fusion of the traditions of Hindu and Buddhist religious practices.

He will put it between your thumb and forefinger of one hand and place your palms together so you’re doing a nop with the string. Once you’re finished the blessing, rub the string lightly to “press the luck in real good”. Be sure to Nop thanks after a baci string gets tied onto your wrist

During the Baci ceremony, a white (purity) thread of silk or cotton is tied on the right hand wrist of the individual or well being and good luck. The thread is first knotted before tying on the wrist of the person to be blessed and other guests.

In Laos, white is the color of peace, good fortune, honesty and warmth. The white cotton thread is a lasting symbol of continuity and brotherhood in the community and permanence.

Before the thread is tied, the hand is held chest high as a mark of respect.

The white thread is symbolic of “peace, harmony, good fortune, good health and human warmth and community.” The thread is worn by an individual for a minimum of three days and is untied thereafter (thread is not to be cut). It is preferred that they are kept until they fall off by themselves.

There is a legend that links the thread’s significance to a successful and happy union. In Laos, where traditional way of life is of trust inn beliefs and superstitions, a marriage has a special link to an ancient legend and to the thread tying ceremony of the Baci celebration.

According to legend, marriages are predetermined in heaven by Nene or “Love Karma”. In the heavenly garden, each individual has a tree with branches cuddling to the soul of his or her life partner.

Eventually such pre-destined intertwined trees move to earth as human beings with their wrists tied together by a cotton thread. In the process of coming to the earth, the cotton thread binding them is severed by “wind of scissors” and they are born on earth as separate individuals.

Once on earth, they search for their soul mates, and performing the Baci ceremony rejoins them by tying the symbolic thread. If the thread so tied remains intact for three days after a marriage, then the union is considered fortunate and lucky.

The baci ceremony runs deep in the Lao psyche. In different part of the country it differs in meaning, but in general, it is an emphasis of the value of life, of social and family bonds, of forgiveness, renewal and homage to heavenly beings. Its observance is to establish and maintain a social bond that creates “balance and harmony to the individual and community, as a substantiation of human existence.”

Tdung pah kwan – making of pah kwan:
This task of preparing and setting up the pah kwan or flower trays for the ceremony is often shared by elder women in the community.

Keunt pah kwan – introduction of the ceremony:
Everyone touches the pah kwan as the mor phon chants Buddhist mantra.

Pitee hiek kwan – calling of the kwan:
The mor phon calls upon the wandering kwan to return and inhabit body of each person

Pook kwan – tying of kwan:
When the mor phon finishes the invocation, he places symbolic food into the upturned hand which the recipient has extended. He then takes the cotton thread from the pha kwan and wraps it around your extended wrist, tying it there. While securing it with a few knots, he chants a shorter version of the invocation strengthening the power of the blessings.

Song pah kwan – closing of the ceremony:
Once the pook kwan is over, everyone touches the pah kwan again as a way to conclude the ceremony.

Sharing of meal:
After the ceremony, everyone shares a meal as a member of the community.

What do I wear to a Lao baci?
Dressing nicely for a Baci shows respect for the host and for the ceremony. For women, wear a Sinh, with a nice shirt and avoid flip flops.
For men, wear a collared shirt and light pants. Try not to wear shorts Also, try to wear shoes (no sandals or flip flops).

Note: it’s OK to take photos during a Baci.