The first few days of being back in the Hims, and I am once again sinking into the feeling of returning home. Sikkim is filled with extraordinary sites, from lush green jungles to barren mountain plateaus, tiny orchids bursting on hillsides and colorful prayer flags scattered across the skies, and a people filled with generosity of spirit and endless smiles. The country derives its name from Sukha (happiness) and the original Lepcha people understood it as “Nye-mae-el lang” – Abode of the Gods. 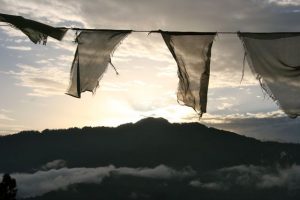 When I am here in these mountains, I can understand how the Lepcha, Bhutia, and Nepali people view this as a fertile and sacred land. I feel especially protected by Kanchendzongna or K3, the world’s third highest mountain looming over Gangtok. This is a jewel of ethereal beauty, cradled deep in the splendors of snow clad Himalayas.

In morning yoga classes, we work in asana and move in our bodies to awaken the prana inside. The majestic mountain serves as an anchor for the spirit of this land. As we come to know ourselves in the yoga practice–the differences in each hip or shoulder, the way a slight movement of the foot can change an entire standing pose–this same subtle awareness and awakening of what is already inside of us is what K3 represents to me. 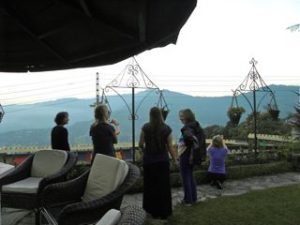 I have visited this land three times already and saw K3 the first morning I was here in 2007. I took it for granted — took a quick pic and assumed we would have glorious views throughout the trip. Alas, she never appeared again, and I was always looking to the clouds and waiting for her majesty. This mountain sets her own schedule, and no one can predict her whims! On this visit, we keep looking to the horizons to catch a glimpse of these splendid views. Each day, the mist and clouds look like they might lift off the high peaks, but still she hides in the clouds.

I use it to serve as a reminder in my yoga practice: The hidden mountain peaks are a reminder of that which remains hidden, yet lends the strength and stability of a great force, whether you can see it or not. The mountain I affectionately call K3 has landed deep in my heart somehow, and I have been touched by her majesty. This sacred deity feels like a protective Mother to me and all people of this land. 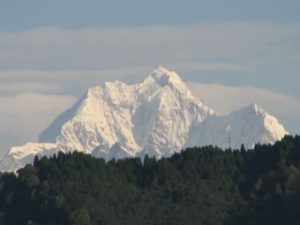 And this morning, a knock came at my door at 5:00am, and Tina Kaufmann said “The mountains are out”! We quickly threw on clothes and woke up the group to run outside and catch the elusive Protector. She was glorious and radiant and glowing in the morning light.  An auspicious start to this day!