Have you ever felt some things just don’t translate completely?

I was recently having a conversation with my Tibetan friend Thinlay, who lives deep in the Himalayan range of Northern India. Thinlay and I met years ago at Sarnath, in a circumambulation (Kora), around the stupa, and the small miracle of a Tibetan national and Chinese national doing Kora and talking about teachings of the Buddha felt like a good drop into the cosmic ocean of peace, and we have been friends since that day. 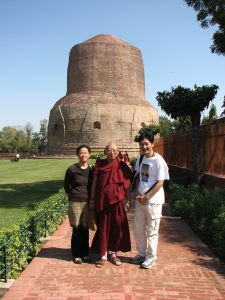 We have always had a good time discussing how words translate the teachings of the Buddha from  Sanskrit and Pali to English or Hindi or Chinese. The way young Bhuddists in Asia learn about the teachings has a lot to do with repeating words and understanding into the cells of the body a relationship to the word or mantra.

Words like Karuna, translated as Compassion or Metta/Maitri as Loving Kindness have a different feeling tone in an Asian language than English. Many asian languages are Sanskrit based, like Indonesian and Thai, so the familiarity of personal and cultural context colours understanding. Our own history, culture and personality will often collide with the experience of things. Just as you and I can feel differently after a musical concert, as after a deep savasana. I may love a piece of music, teacher or class and have a very different perception with some of my dearest friends who are in the same room attending the same concert or yoga class!

As a multi-culti Chinese yogi straddling East and West, the chants of Buddhist monks in repetitive drones of Pali or Sanskrit words are a lullaby to my senses, as Gregorian chants might be for someone steeped in western culture. We  carry our experiences of life in our hearts and minds, and the influences of the past can colour our view darker or lighter.
Thinlay the Thangka Painter

Thinlay Gyatso was born in Darjeeling in West Bengal, India, and his family helped many Tibetan people escape to Darjeeling from their difficult journeys over the worlds highest mountain passes.

Yonten Gyatso, Thinlay’s father was the son of a deadlocked Tantric master Tari Lama (Lama Lhawang) who lived in Dagyab, Eastern Tibet and his mother a native to Tsang province of Rimbung. The family left Tibet and found refuge in the Indian Himalayas, and when Thinlay was as a teenager, they found an old monk, who lived in a small wooden house, so dark that one could hardly see, and requested the favour of teaching the young boy the art of Tibetan thangka.
Thinlay studied Tibetan arts at Gyumed Tantric University, and worked on a special commission (of all Dalai Lamas I – XIV) for H.H. the Dalai Lama, which hangs in Dharamsala, home of the exiled Tibetan leader. Working closely with Lama Dagyab Kyabgon of Gelukpa linage, and under tutors of H.H. Dalai Lama, Thinlay has been immersed in the traditions of his Tibetan roots, far away from my own history of East-West blended masala mix.

We often talk of the differences in Buddhist traditions and practices. I love learning about his culture, and he is often befuddled by mine. Both the Chinese side, and the Western one.

One thing we love sharing is the definitions of words and thought patterns.  I once asked him about the western idea of “self esteem“, and he had very little idea of what I was talking about. Self Esteem is not a word found in Tibetan language – it just doesn’t exist. There is no Tibetan or Sanskrit word that can truly explain the suffering that can come with this word and thought. And what an idea, that we would never have this as part of daily mind fluctuations!

So I mentioned something about how I see Yoga changing in the United States, and how confusing it is to see it move from a traditional path, with deep, and sometimes misguided respect, for teachers and ancient teachings, to the modern proliferation of teachers and teachings measured by popularity and financial success. I explained that I am seeing more and more that “Western yogis are beginning to confuse Status for Respect, for ourselves and others”.

The next question from Thinlay stopped me in my mind tracks –
“what does that mean – Status?”

When we stop and think of what does this really mean “status,” and what it would mean to a person who grew up in the Himalayas, living in community steeped in traditional Buddhist thought. A community that asks from childhood to be selfless, think of others, and move in all aspects of life with kindness and compassion. A community that were traditionally nomadic mountain people who bartered and traded what was needed, and had no understanding why we would ever take or have what was not needed.

His world and mine are diametrically opposite – a Hong Kong city girl raised in boarding schools and things=love attitudes, versus a Tibetan thangka painter raised by reincarnated lamas and monks.

What does “Status” mean to us in our lives?
How much of our suffering is caught in the ideas that float through the disconnect of what is “needed” in life.

I responded with words trying to say what I wanted – Power was the next one I tried. And again, Thinlay responded quizzically –
“power without wisdom?” 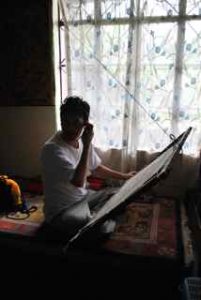 Oh, that’s right, he lives in a mind where power only comes from wisdom. What a different view of the world we have!

So we try a few more words back and forth, and think we are moving toward the same ballpark of thinking, and he reminds me:

“its actually normal with every education these days; people thinks that they don’t have time…in fact the time is always the same…it is only the people minds are busy, but they will realize… “

Time is the great equalizer of us all. We all have the same amount of time.

Take time to look inward on your journey of this yoga practice. As I stand on my head, or try to get steady in that arm balance, I am at the end of the day, the same. It is how I live my life and what choices I make with my brother, lover, friends and students that affects this lifetime. It is who I am in the darkest of the night, as well as who I am in the happiest of celebrations. It is who I am when I know no one is watching that counts at the end. What residue do I leave in my wake.

So take time, and reflect on what this practice of yoga is. What is it we practice and meditate for? Why do we chant and discuss yoga sutras and philosophy. Why do we do it all? What changes? Who changes? What remains?

Take time for yourself and take time on the mat, or take a nap and spend time with your beloved. Life can be the most challenging yoga pose of all. How much does that arm balance with your legs behind the head compare to the art of staying balanced while going through a divorce, or caretaking your aging parent?

I took this conversation as a reminder to stay in myself looking inward, and look at how I see the world, and what parts of me are seeing.To draw my senses inward and downward, into the very existence of my true nature. Into the seat of my heart. Home.

As Patanjalis Yoga Sutras remind us in PYS I.3:

Then, pure awareness of the Seer can abide in its very nature.

And perhaps with more practice, I can begin to catch my own monkey mind from flying too far astray. 😉

For information about Thinlay and his thangkas, click here

This is simply beautiful! I love your words of wisdom- you inspire me 😉

call when you have a moment. love!

Wonderful exchange and very enriching … Thinlay la is a wise, warm hearted and bright person. Blessed is everyone who knows to listen and understand. You did great translation and you had the wisdom to do it. My respect and thank you for showing the beauty of the true Tibetan mind.

I just happened to stumble across your website and love this article that it really made me think of the concepts that we put a lot of meaning on to them.
thanks for the sharing
ozge

Reading in my yoga class this weekend. Love.