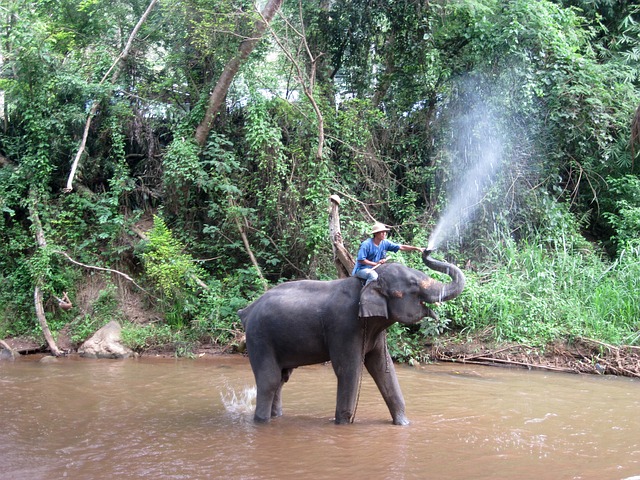 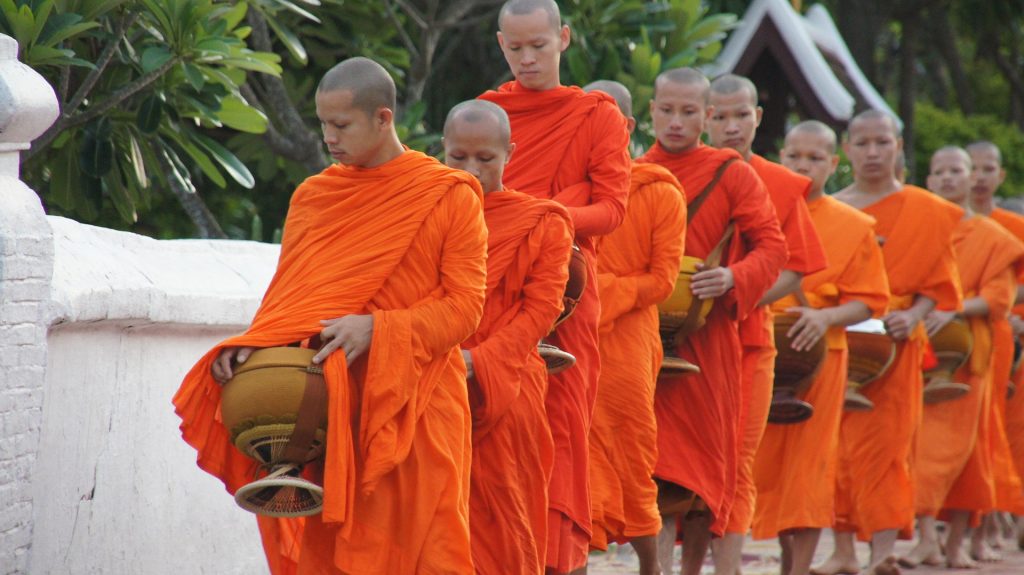 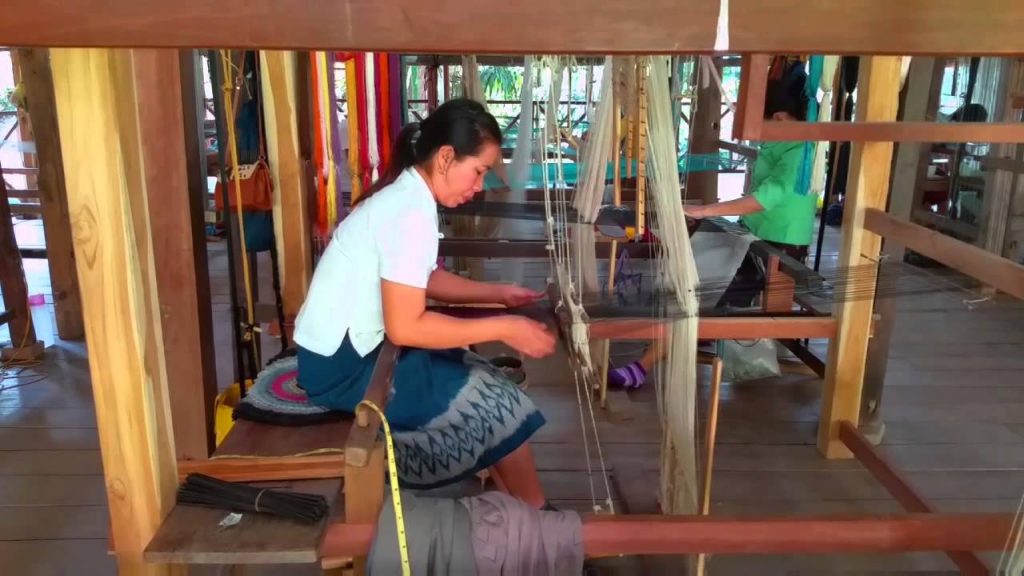 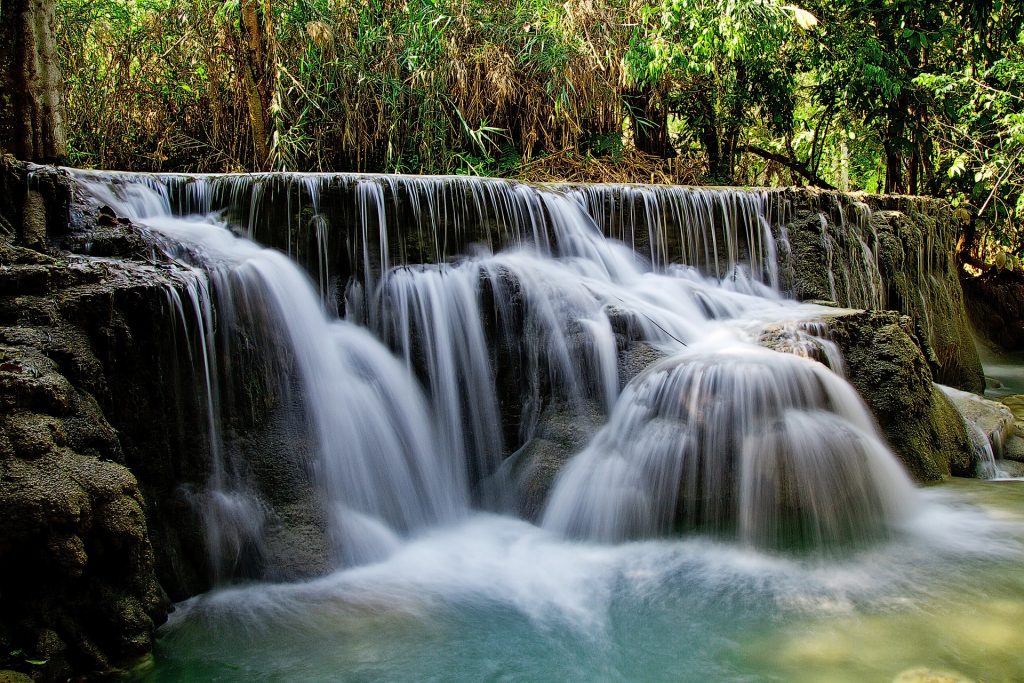 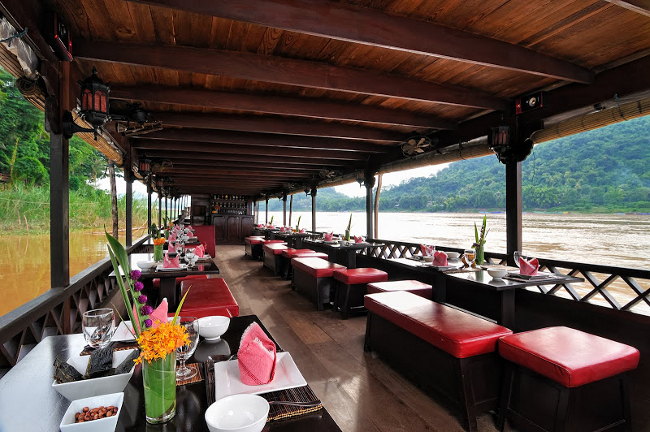 There is a saying in Asia : Vietnam plants rice, Cambodia harvests rice, Thailand sell rice, and Laotians listen to the rice grow. Laos is the definition of mellow.

The tiny and ancient town of Luang Prabang, the charming and serene spiritual capital of Laos has been designated a UNESCO World Heritage Site since 1995.

While the rest of Southeast Asia is growing, expanding and modernizing, Laos moves at its own pace, ambling along, taking plenty of time for meditation along the way. Everyone who visits laid-back Laos falls in love with this slow pace of mellow in the Mekong. Since coming in 2009, I fell in love and still have a piece of my hart here!

This is a fave spot of mine to immerse in yoga and meditation, learn about traditional Laotian spirit and beliefs, feed baby elephants at a river sanctuary, ride  a Mekong River cruise, meditate in Buddhist caves, swim in turquoise waterfall lagoons, and walk through this historical UNESCO town, soaking into the laid-back lifestyle of Laos. This is a place to lose yourself into Buddhist culture, bike along temple gates, or wander into small scenic streets and explore this gem of a town.

Nestled at the confluence of the Mekong and Nam Khan rivers, amidst a backdrop of jungle-clad mountains, Luang Prabang is a most sacred and scenic spot. Crowned by verdant mountains and housing over 30 Wats (temples), former royal palaces and scenic ponds, it is the cultural nucleus of Laos.

The former Royal Capital is at its most vibrant after the rainy season (Sept-Nov), when the forests are brilliant emerald and the rivers are in full flow. We will benefit from the full rivers and verdant forests.

Saffron-robed monks collect their daily alms and ornate temples such as Wat Xieng Thong offer spiritual solace.  Luang Prabang is known for its artisanry and culture, with interesting galleries, bookshops and other venues that specialise in traditional arts and crafts. Outside town, the beautiful countryside is rich in ethnic culture.  Out trip includes a leisurely river cruise on the Mekong to bring you to Pak Ou Caves, where the Kings damaged Buddhas were stored. Additional Options include a journey to Kuang Si Waterfall, a succession of falls and crystalline jungle pools, and an Elephant Sanctuary to learn how Laos is heloing to protect their environment.

According to legend, Luang Prabang was founded by one of the seven sons of Khun Borom, a demi-god and the mythical father of the Tai people, in 698 AD. As the Khmer Empire rose to dominate Southeast Asia, a young prince set up the first kingdom of Laos – a place named Lan Xang, or “Land of a Million Elephants and White Parasols”, and the heart of this new kingdom was Luang Prabang.

In the Realm of a Million Elephants, the Lao King was of divine origin. He came  from Khun Borom, the Son of the Heavens. The Phra Bang (delicate Buddha) is the mystical national emblem of Laos.

According to the legend, it was made in Sri Lanka between the 1st and the 9th century, and belonged to the Realm of Angkor before being given to Prince Fa Ngum. It arrived in in 1359, and Luang Prabang was renamed.

The Phra Bang is considered a symbol of the right to rule Laos. Only a pure and true government may keep this sacred image. Its story, like that of Laos is tumultuous.

The Baci is used to celebrate a special event and is a local blessing. Ancient belief in Laos is that the human being is a union of 32 organs and “Kwan” watch over and protect us. Kwan are “vital forces”, “private reality of the body” and “vital breath.’ Su khwan  means “calling of the soul” and is the ritual of tying strings around a wrist to preserve luck.  Buddhist deities, animist deities and spirits are invoked amidst the chants for the return of Kwan (souls) from wherever they are back to the body to ensure equilibrium. It is said to be a fusion of the traditions of Hindu and Buddhist religious practices.

For over 600 years, locals of this UNESCO World Heritage City have been waking up before dawn to prepare for Tak Bat. Tak Bat is the sacred daily morning ritual of saffron-clad monks collecting offerings of Alms from the faithful residents. Awakening before sunrise, hundreds of monks from the 35 temples of Luang Prabang walk in silence, meditating as they collect  daily alms from devotees. This is the Buddhist practice of making merit, a symbiotic relationship between the monks and alms givers.
By feeding the monks the lay people generate good karma and the monks grant merit to devotees that counts towards their future lives.This procession is unique in Laos, and the only Buddhist nation still preserving the tradition.

Kuang Si is a giant waterfall that flows through limestone-rich jungle and empties  into a series of gently cascading pools. From the lowest one, each pool seems like a step on the way up to a holy site. The large cascade tumbling from the jungle feeds a series of falls and pools that make perfect swimming holes.

Legend has it that a wise man summoned water by digging into the earth. Then a golden deer made its home under a rock protruding from under the new waters. Kuang means deer, and Si means dig.

Laos is renowned for its tradition of weaving, and weaving is an art and skill passed on for generations. Each cloth  tells a story about the weaver, village, tribe and ethnicity. Some tribes including Hmong, Tai Lue, Tai Dam, Lanten and Katu are renowned for their creations. Textiles are a wonderful way to connect with Laos and discover the country’s diversity. Weaving is done primarily by village women, and is considered domestic work that has little economic advancement. By operating on fair trade principles, OPT has given village weavers the ability to earn sustainable livelihood for their communities. And with a venue to educate visitors about the cultural and artistic value of the textiles.

Laos was known as the Land of a Million Elephants (Lane Xang) but the elephant is now endangered. 1000 remain, of which an estimated 500 work in the forest industry harvesting timber. As the harvesting of timber in Laos diminishes it translates into hundreds of jobless elephants. Get up close and interact with the gentle giants of Laos, including a ride on the elephant’s neck. You will get closer to these animals than most people ever do, and you’re supporting a good cause.

The Wats of Luang Prabang

The town of Luang Prabang, a UNESCO World Heritage Site, houses many historical temples. Luang Prabang’s most significant temple, beautiful Wat Xiengthong, a Buddhist monastery considered to be the most outstanding in all of Luang Prabang, featuring a meticulous design and extensively decorated with gold stenciling on black and red lacquer.  Haw Pha Bang on the Royal Palace Museum was built to enshrine the most highly venerated Buddha image, the 14th century Phra Bang, and originally built as a residence for King Sisavang.

With such a diverse group of temples in town, you can also wander Wat Mai, a temple renowned for golden bas-relief, and Wat Sensoukarahm built in the early 18th century. Wat Mai and Wat Sene are also nearby to visit.

People of the Heart

Lao are ‘people of the heart’. They believe the heart is the source of intelligence as well as emotion, and that ideas are the sounds or voices of the heart. There are many common Lao expressions which include the word jai – heart.

Expressions define the cultural essence of people. In Lao expressions include: boh penh nyang or thammadha

These take on different meanings depending on context, and they are derived from the Buddhist concept of acceptance of the prevailing situation.

Boh penh nyang is sometimes used in literal meaning, “No problem” but it can also mean “never mind” or “are you all right?” or “I forgive and forget your action.” The expression thammadha is also steeped in Buddhist philosophy – fundamentally, it means acceptance of one’s fate –  that we are  born, grow old and will die. But it is also understood in daily life situations to mean “basic, regular, the norm or proceeding as usual”.