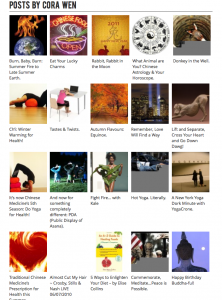 CORA WEN grew up in a traditional Chinese family in Asia and the West, and took refuge in the Buddha as a teen. An international childhood growing up in Hong Kong and Indonesia, Switzerland, Australia and the US, has instilled the spirit of a travelling adventurer. After sowing wild oats in New York City in the 70s with rockers Deborah Harry and Patti Smith, she had careers in fashion and banking. Since 1994, Cora has taught Yoga, mentored by America’s most influential Yoga lineage. She has been dedicated since 2002 in support of indigenous culture for exiled Tibetan people and land mine victims. Find her at www.corawen.com.