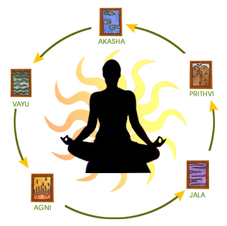 I have always been fascinated by different cultures and how they intermingle. As a multi culti masala mix myself, Ive been interested in how people from different parts of the world see things, and how that is similar or dissimilar to the way I was brought to see things. And in travelling around the world for most of my life, Ive found there are more similarities that there are differences. Perhaps this is why I always believe we have a chance to promote peace on this planet by learning about our neighbours in other cultures.

The  beliefs of the subcontinent of India share a similar single Reality, and revere the manifestations of  Ultimate Reality in the form of Gods. Every form of creation is regarded as a manifestation of the supreme reality Ishwara, and manifested as a combination of one or more of the five basic elements. 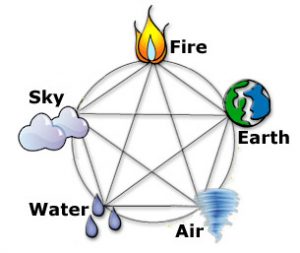 Vayu – Air is the fourth element. Shape is round, color blue or black, sense is touch, function is manipulation (hands), deity is Shiva, chakra is anahita, bija is “Yam.”

Akasha – Space is the highest element. Shape is like a flame, color purple, sense is hearing, function is communication (throat), deity is Devi, chakra is vishuddha, bija is “Ham.”

Five temples in South India worship Shiva personified as  these elements Air, Water, Fire, Earth and Space. These temples are the Shivastalams at Sri  Kalahasti in Andhra Pradesh, Tiruvanaikkaval near Tiruchirappalli in Tamilnadu, Tiruvannamalai in Tamilnadu, Kanchipuram in Tamilnadu and Chidambaram in Tamilnadu.

Ishana is Shiva not visible to the human eye, and Sadyojaata is Shiva realised in basic reality (in elements of earth, sense of smell, power of procreation and the mind). Vishnudharmottara Purana of the 6th century CE assigns a face and  element to each mantra: 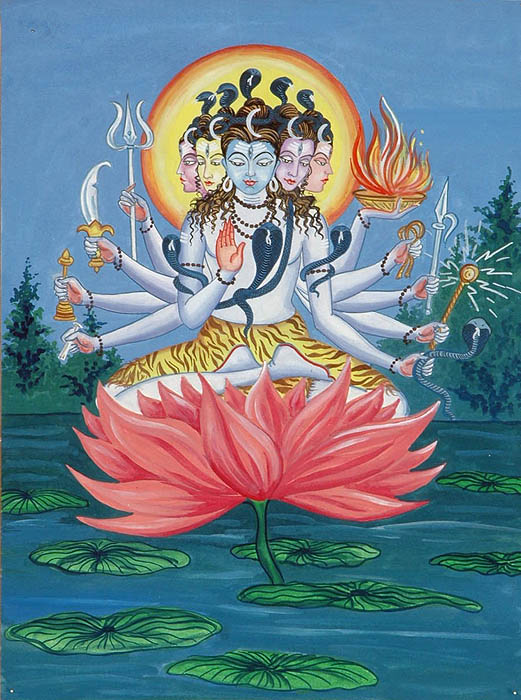 The names of faces with their elements:

Lord Shiva is typically depicted with a white body, signifying purity and his linkage to snowy mountains. Shiva’s five faces,  represent his five cosmic tasks of creation, establishment, destruction, oblivion, and grace. Panchamukha lingams have been found from the 2nd century, and the Trimurthi Sadasiva image of Shiva in the Elephant’s Caves near Mumbai is a beautiful stone portrayal of the five faces of Shiva.

The five faces are linked to the primeval symbol of Ohm.

Four of the five faces look in the four directions while the fifth looks upward.

The white face looking north is Sadyojat (or instantly born).
The red face looking west is Vamadeva (Vama is left and Deva is god) and symbolizes the ego.
The blue or blue-black south face  is Aghora (that which is void of darkness), and symbolises the intellect.
Tatpurusha (or the supreme being) is the yellow face looking east, representing the form of nature manifested on earth.
The copper face looking upward is Ishana (or supreme ruler), symbolising knowledge in its entirety.

The crescent of the fifth day moon near his head symbolises being one with Time, and his cosmic proportions. It underlines the fact that he controls the mind completely.

The crescent moon represents birth and growth, and places the power of procreation along with destruction in the same deity.

Topic s short, sweet and informative.
But I could not understand the difference between these 2 categories
……assigns a face and element to each mantra:
The names of faces with their elements:
Each face has only one name like Sadyojaata,Vaamadeva etc. Isn’t it?
Though you have posted in 2011, I happened to see today during my search for some other thing.

Can you tell me the most important mantra of Shiva to pray for health & wealth?

Can you show me the mantra of Shiva to pray for health & wealth?