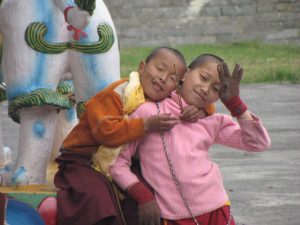 Nepalese call it Sukhirn – ‘The New Place’; and for Bhutias seeing endless tracts of paddy fields it was Demazong, ‘The Valley of Rice’. But the original inhabitants, the Lepchas understood it simply as ‘Nye-mae-el lang’ – abode of the Gods.The word Sikkim may have originated from the Sanskrit Sikhin ‘summit’ or from the Limboo Su khim ‘new homeland’ or ‘happy homeland’. The Bhutia call it Denzong ‘land of rice’ or ‘valley of rice’. The Lepchas call it Ney-Mayel-Lyang ‘heavenly hidden paradise’. Guru Padmasambhava (Guru Rimpoche), a revered Buddhist tantric monk from Tibet, who is believed to have visited this land in 8th century, named it Beyul-Demojong ‘the hidden valley of rice and fruit’. 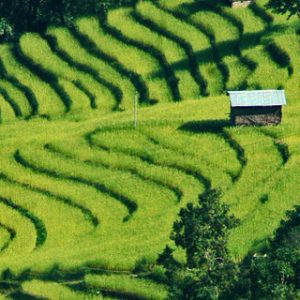 Tiny tantalising Sikkim is the pearl of eastern Himalayas, with  majestic Khangchendzonga in the West, the Tibetan high plateau North and the kingdom of Bhutan in the East.

Khangchendzonga is not only a mountain but also the protector deity of Sikkim. Surrounded by snow-covered mountain peaks, fertile valleys, wild mountain streams and paddy rice fields live a variety of people: The Lepchas and Bhutias, originally form Mongolia and Tibet live together in harmony with people belonging to different tribes of 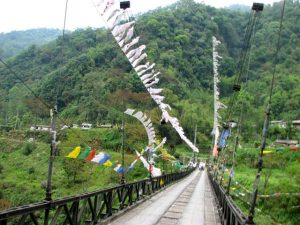 Rice, corn, potato and millet is grown in the paddy fields. Mandarins, apples, papaya and even bananas are amongst sikkims wealth in fruits.
Cardamom and ginger are grown commercially and make up Sikkims main export goods.  Within few hours the subtropical heat of the lower valleys move all the way to the alpine zones of a mighty mountain world. This wide variety of climate on a small area of land is responsible for an unbelievable species in plants and animals, with over 600 types of orchids, colourful forests of rhododendron and 500 – 600 species of birds.

Sikkim was considered one of the most remote and secret places in the world, and is still  connected to India with one precarious mountain road. Sikkim was an independent Buddhist kingdom until 1975, when India annexed it into the 22nd state. It was in 1990 when this beautiful area was opened to foreigners, and currently r
equires an additional permit, along with valid Indian visa, to visit this fascinating and secluded mountain land. 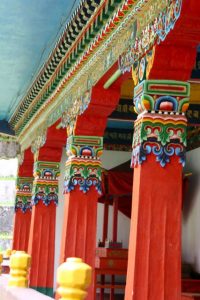 Lepchas, the earliest inhabitants of Sikkim, migrated here from Assam or Myanmar in the 13th century, followed by Bhutias who fled religious turmoil in the Kham area of Tibet in the 15th century. In 1641 Lepcha chief Thekong Tek and Bhutia prince Khye-Bumsa signed the Blood Brotherhood Treaty at Kabi Lungtsok in North Sikkim, with Mt. Khangchendzonga as their witness.

The Nyingmapa form of Mahayana Buddhism was brought to Sikkim by three refugee Tibetan lamas who met at Yuksom. In 1642 they crowned Phuntsog Namgyal, a descendant  of  Khye-Bumsa, as the first chogyal (king) of Sikkim,
which marked the beginning  of the Namgyal Dynasty. At the height of power, the chogyals ruled eastern Nepal, upper Bengal, and Darjeeling. Territory was lost in wars with Bhutan and Nepal, and in the 19th century, Hindu Nepali now the majority of Sikkim’s population. In 1817 Sikkim came under British influence and in 1835 ceded Darjeeling to Great Britain. In 1890 it became a British protectorate, and in 1950, a protectorate of India. Sikkim’s last chogyal ruled from 1963 to 1975, when Sikkim became a state of India.Spread over 7096 sq km, Sikkim enfolds the upper valley of the Teesta River, the major tributary of the mighty Brahmaputra River. Its southern borders with West Bengal are shared with the Rangit and Rangpo Rivers, and  Singhalila Range acts as a natural barrier with Nepal in the west and the Dongkhya Range runs along the borders from the north to the north east. Elevations range from 270 m above sea level in the south to over 8589 m in the north and northwestern region. 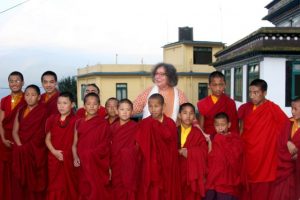 Our Magical, Mystical Himalayan Tour encompasses the remote regions of Sikkim in India’s north east and the reclusive Druk Yul, ‘Land of the Thunder Dragon’, Bhutan.
Both Sikkim and Bhutan are relatively unspoilt by tourism. Bhutan opened for tourism in 1974 and is the world’s most exclusive destination. This journey takes you to a region of high altitude to look over unrivalled scenery of the Himalaya Mountains and valleys, visit monasteries (Tibetan: Gompas) and meet indigenous peoples of the mountains.

This exciting journey explores the tiny Indian state of Sikkim,  known as ‘The Garden State’, with spectacular flora and fauna and abundant flower nurseries. Boasting a plethora of monasteries and exceptional scenery, this state is inhabited by gentle Buddhists and

Gangtok (1572 m), the capital city in the east district, is the seat of governance and the primary hub of commercial activity. The drive up the Teesta gorge to this prettily located first town of Sikkim is spectacular.

Gangtok is near the ancient Rumtek Monastery, and is convenient for trips to the ethereal environs of mystical Tsomgo Lake and Nathu La. Flower-filled meadows and hot springs, splendid vistas and tribal culture lure us North, and the stunning environs of the West with the misty, fairytale Belling, with its spectacular views of Khangchendzonga, and the sacred, prayer encircled Khecheopalri (wishing) Lake.