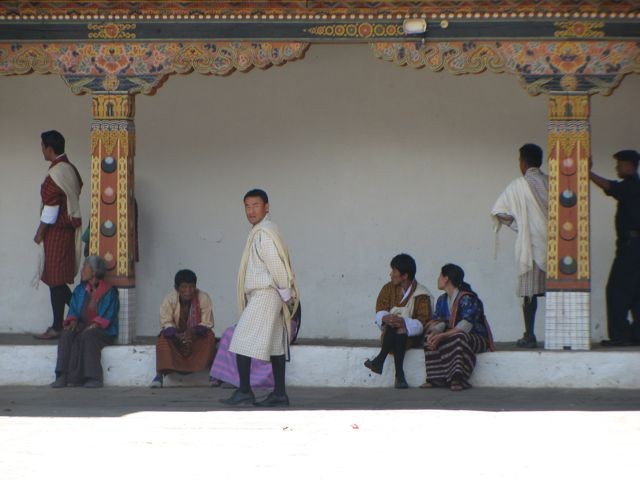 The Kingdom of Bhutan, Druk Yul – Land of Thunder Dragon 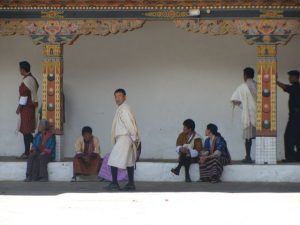 Bhutan, the Land of the Thunder Dragon, is a magical place. A country where a handsome young Asian Elvis look-a-like became King, cigarettes are illegal, chillies are a staple, rice is red and giant protective penises are painted on houses, schools and temple walls. A land that treasures Gross National Happiness more than Gross National Product.

It is a small nation of about 750,000 people in the Eastern Himalayas, nestled between Tibet, China and India. It has a unique government which has intentionally kept it isolated from modernity. Bhutans extraordinary Buddhist sites and undisturbed traditional culture makes it the last remaining great Himalayan kingdom.

The word Bhutan may come from Sanskrit “Bhotant” meaning “end of Tibet.” The Bhutanese refer to themselves as the people of “Druk Yul” or “land of the thunder dragon.” The national language of Bhutan is Dzongkha, a dialect very similar to ancient Tibetan. The Bhutanese resemble Tibetans and are linked through a strong Buddhist tradition, in Tantric Mahayana Buddhism, believed to be the fastest “path” to Nirvana. 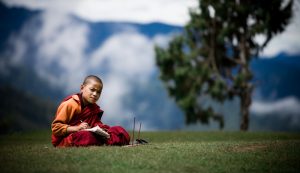 Scholars, economists, statisticians and sociologists have studied the people of Bhutan and found them some of the happiest people in the world. This is a nation of saintly hermits, travelling magicians, a beloved and benevolent philosopher king, outrageous trekking, stunning nature and a land and people that will surprise you at every turn. Bhutan mixes ancient and modern worlds. You may see novices typing ancient texts into computers, while monks and traditionally dressed minstrels chat on mobile phones.

Bhutan is a wild adventure into a magical, mystical and enigmatic land, the ‘last Shangri La’. This medieval like kingdom will enter modern times fiercely maintaining a distinct and amazing cultural identity. The kingdom is deeply Buddhist, and religion is embedded into everyday life. 1000s of prayer flags fly on hillsides and mountains, every house has a prayer room and small flags above houses offer appeasements to local gods. Each valley is dominated by a Dzong, a high-walled fortress, which is the community religious and administrative center. Dzongs are remnants of feudal Bhutan, when each town was a kingdom

Tourism in the Kingdom

Tourism is unique, and is meant to ensure balanced socio-economic development and preserve tradition and culture. The Department of Tourism (D.O.T) sets strict rules and regulations designed to discourage mass tourism. Visitors have to pay at least US$200/day in taxes, so it may be the world’s most expensive country to visit! 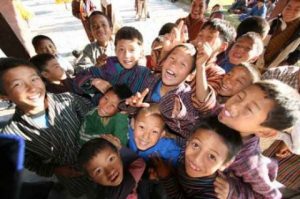 The number of tourists visiting Bhutan is small and has risen from 3000 in 1993 to 11,000 in 2005. The Department of Tourism is developing infrastructure to accommodate 15, 000 tourists by 2025. This limited tourism provides the opportunity for visitors of Bhutan to gain a unique insight into a way of life seldom seen. It is a privilege to see the unspoilt, sparsely populated land filled with enchantment. Bhutan’s past is its present and offers a glimpse into another way of living, an alternative view of what is important.

The Bhutanese may seem cut off from the world, yet keeping out foreign influence and preserving national culture has proven to be good for the people, and the king has often been quoted: “Gross National Happiness is more important than the Gross National Product.” There is a “GNH” scale, and the Bhutanese have been ranked top 10% of the world’s happiest people, with a very low per capita.
History of Bhutan

Feudal Bhutanese history ended in 1907 with the unanimous choice of Ugyen Wangchuck as king, elected by an assembly of Buddhist monks, government officials, and important families. The Bhutanese do not see their king as a deity, yet monarchial power remains absolute. A parliament was established in 1953, and Bhutan joined the United Nation In 1971. 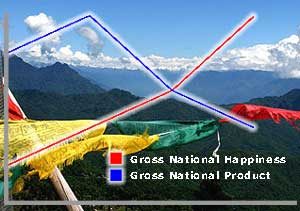 The current king, King Jigme Singye Wangchuck is son of late King Jigme Dorji Wangchuck, fourth in the Wangchuck dynasty. As a crown prince, he toured remote areas meeting the people. The beloved fourth king in the Wanghcuck dynasty abdicated the throne to his son in 2006 and declared by royal decree that in 2008 Bhutan would become a constitutional democracy. A constitution was drafted in 2005 and copies were distributed to each citizen for feedback. There was an issue of 70,000 Nepali refugees expelled in the 1990s, and has never been resolved.

King Jigme Singye Wangchuck has been called a King of the people, and he sits on national assemblies, and encourages local participation. He has decentralizes much of the government yet maintains royal control.

Life in Bhutan is a mix of the ancient and carefully censored modern. Until 1960 there were no roads, and the country still does not have a railroad system. The isolated geography of the nation is partly how it has remained untouched, but it is also due to strong efforts of the government. Radio was allowed in 1973, but only 30mins on Sundays. Television came in 1999 and internet in 2000. Beginning 1974, small numbers of tourists were allowed to enter the country 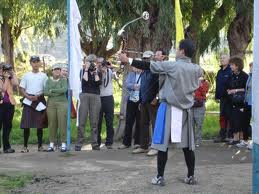 There is a national dress code requiring Bhutanese to wear traditional dress in public before night fall and at all formal occasions. This is called Driglam Namzha. Men wear a heavy knee-length robe tied with a belt, called Gho. Women wear colorful blouses and a folded large rectangular cloth called Kira, which forms an ankle length dress. For special occasions and festivals, colorfully patterned silk Kira and  Gho are worn, but most people wear earth toned or checked garments.

The Bhutanese are famous archers, and soccer has recently become popular. Religious festivals are extremely important and often last for several days, with masked religious dances. The Bhutanese believe the audience are blessed by watching.

Cold climate and sturdy life in hilly terrain have developed a Buthanese appetite for good food, drinks, and beverages. Traditional Bhutanese food is hot and spicy. Try the tasty and fiery national dish of Bhutan, Emma Datshi. Emma Datshi is on every menu, and made entirely of chilies, fresh or dried, treated as a vegetable and served in a cheese sauce spiced with onions and tomatoes. Phagshapa, made of strips of pork-fat dried and stewed with radishes or turnips and dried chilies, is another popular dish. Momos, and thugpas are snacks in every restaurant. Momos are cheese or meat-filled, while thugpas are  mixed with cheese slices, chillies, carrots, and onions. Salted butter tea, or suja, is served with Zow or roasted rice.

Rice is the staple food but Bhutanese are fond of meat, especially dried meat. Pork, beef, chicken, and fish are served with chillies, a ubiquitous and fiery part of every dish. Though there is white rice, Bhutanese prefer a local red variety. In Bumthang,  buckwheat is the staple diet, and the regional specialty is puta, earthy buckwheat noodles. In Haa, it is hontay, rich buckwheat momos (dumplings) filled with datshi (cheese) and spinach or pork.

All hotels have a choice of Bhutanese, Indian, Chinese, Japanese and Continental cuisine. Bhutanese delicacies are spicy with lots of chillies and cheese. All sorts of drinks are available, and Red Panda beer is a Bhutan-made with a Himalayan taste.

[…] This post was mentioned on Twitter by CoraYoga, CoraYoga. CoraYoga said: If you've ever wondered about #Bhutan – check out some interesting history and stories! #YogaAdventure #buddhist http://fb.me/w0ZPft5N […]