It’s been a long time since I’ve updated this site. There has been so much going on in my life that it felt appropriate to take some personal and family time and space. It was also a difficult and sad year with losses of long-term friends who have been influential in my yoga journey over the last 30 years. These transitions remind us of the Buddha’s teachings on impermanence and letting go. 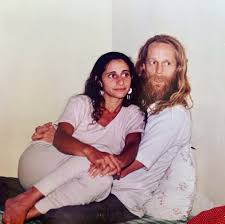 This year we lost Maty Ezraty, founder of YogaWorks and an inspiration to so many yogis around the world; hers was my first “home studio” in Santa Monica, CA, in the 1990s.

My good friend of many years, Theresa Rowland of Studio Yoga, Madison, NJ, finally succumbed to cancer; she showed all of us in her widespread community what remarkable courage looks like in someone living with terminal illness.

My very dear friend and mentor India Supera of Feathered Pie Ranch also moved “into the light” recently. Her impact on me throughout my journey is deeper than anyone on the planet; I owe her much gratitude for pointing the way.

In my family, the last of our elder generation, my Aunt Sophia left us this Spring at the amazing age of 96. She was a fireball who swam, ballroom danced and practiced yoga throughout her 80s and into her 90s.

All of these women influenced me greatly–in my life and practice. 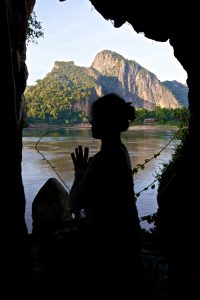 Feeling the space that was left from my exuberant and idealistic 20s and moving into the unknown of becoming an adult, I found yoga just before turning 30. I’ve now spent more than half my life practicing and teaching yoga; it’s been an enduring and satisfying commitment. Yoga has transformed my life in many ways, perhaps the most significant of which is learning to move with the breath and allow things to flow.

Yoga has kept me grounded and reminded me to live mindfully in this body. I sought to inculcate this awareness into my daily activities and also my teaching. This year I listened to my own advice, gave myself permission to rest and took some time off from teaching, from blogging, from telling people where and how to move their bodies.,

The losses of the past year have invited me to think about what makes a teacher and what it means to be a mentor… To reflect on the influences I’ve enjoyed from each of these mentors and also the influence I’ve had on my students.

I am currently working with Yoga Alliance as a consultant to help create a mentoring segment for its advanced teacher training program. It’s a hopeful effort and I’m greatly encouraged at the prospect of improving the standards and curricula of yoga education globally, and applying some of what I’ve learned along the way.

Mentoring is a long-term relationship based on growth and personal development offering valuable, sustainable support and guidance.  A mentor motivates and inspires, helping a protegé achieve his or her highest aspirations. The sharing of knowledge, skills, and professional and personal support facilitates success on all levels. Mentoring works through a unique relationship developed over time, so when the relationship works, the mentoring is successful. 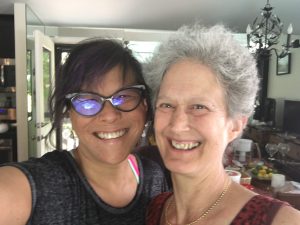 I remember a conversation with Theresa Rowland years ago; we were in an advanced pranayama practice together, and she was assisting Patricia Walden. After class she said to me “You were sitting very straight during your practice and everything was perfectly aligned, BUT the breath doesn’t need so much effort.” Gawd, I thought: I had been trying so hard to “get it right”! Her comment stung, but I knew it was the truth. Breath doesn’t need to be forced; yoga practice isn’t rigid. Here was an honest, valuable piece of constructive criticism that guided me for a long time.

Earlier this year, Theresa was under her fourth diagnosis of cancer at a late stage of the disease; she was on a new round of medication and she let me know it might be our last time practicing together. With typical strength and modesty, she was sharing lots of information about how to work with students undergoing difficult chemotherapy and its potentially severe side-effects. I asked her that day with great sadness, “What am I going to do when you’re gone? Who can I ask these questions?” Her answer epitomized who she was as a teacher and mentor and it will stick with me forever: “Keep learning Cora, keep helping. It’s what we do. We help others.”

It’s what I remember most about Theresa. She helped others, and she created a community around her. Once she was asked what makes a good teacher. “A good teacher is an inspiration,” was her immediate reply.  She started her studio in 1978, out of her parents’ barn in Madison, New Jersey. All these years later, it continues to support a thriving yoga community, inspiring many in the NY, NJ and CT tri-state area and beyond. 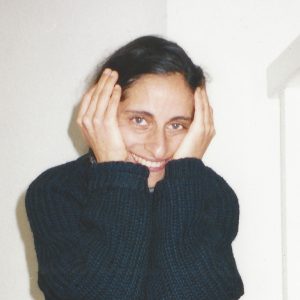 When I first found yoga, it was like a lightbulb had gone off in my head. Years of sitting meditation practice with the monks had left me mostly confused and with a vague sense I was doing things wrong. Hands in the wrong position, elbows too low, chanting at a different pace, forgetting the long verses of Shurangama mantra they taught me. I didn’t feel a sense of belonging or like I was pursuing a path to enlightenment: It was more of a crash course in how to feel badly about myself! Not at all what the Buddha nor my teachers had prescribed.

My first yoga classes were with Cheri Clampett at the Santa Barbara Yoga Center and I ended up studying with Erich Schiffmann in Santa Monica where Maty Ezraty and her partner Chuck Miller had just opened a studio called YogaWorks. Back then, it was one studio, with one head honcho–Maty. She was terrifying! She was tiny, yet her eyes would laser in on you like they could see through every part of your being. I had just begun practicing and was a super-bendy, ultra-flexible, not-in-my-body yogi. Maty saw how much I would bend into my extreme, unaware of the harm I was inflicting on my-then-much-younger body. Lisa Walford and many other Iyengar instructors bought my body into awareness and alignment in those studios.

YogaWorks at that time was unlike any other studio. Maty had her own way of accepting teachers and students, of creating a place that offered a variety of classes and levels. Maty and Chuck were the heart of the operation; Erich was my main teacher, so we all spent a lot of time together at the studio. We all knew each other and it was a tight community. Who knew its leaders (like Shiva Rae, Sean Corn, Rod Styrker, Kathryn Budig) would go on to become some of the leading lights of yoga in America?

We didn’t have Instagram, YouTube or any of the other media tools available now; nothing was captured on video or recorded for mass dissemination or endless examination. The studio represented a safe haven to practice and play; the classes had focus and intimacy. Throughout the late ’80 and ‘90s, Maty built the yoga community in California, helped propel it into the global mainstream and built the ubiquitous brand that is YogaWorks today. 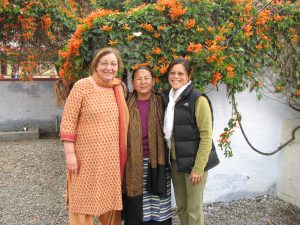 I met India during my honeymoon period with yoga, when I was practicing six hours a day. It seemed like I could do nothing BUT practice yoga. I had met Erich Schiffman at a dinner party in Santa Barbara; although he taught far away in Los Angeles, I quickly committed to studying with him, and decided to attend his upcoming workshop at Feathered Pipe Ranch in Montana. As a veteran business traveler, the flight to the wild, wild west seemed less daunting to me than that regular car commute to Santa Monica.

My first Montana trip was a crazy journey–landing at midnight, arriving at the campsite and settling into a tent in the pitch-dark, groping for a flashlight to find the bathhouse… In the morning, Erich welcomed me warmly, as did the entire staff at the ranch. India had just returned from an encampment for Native Elders; she was always happy to welcome Erich’s groups to her home and I was delighted to meet the ranch’s proprietor and leader.

If you ever met India, you will know of her courage and her love for all–no matter what. Her earthly presence transformed so many lives, including mine. Spending time in her orb could be a deeply frustrating experience, however, as time after time I felt that some people took advantage of her generosity. Yet she did not see things that way at all.

India has supported many Tibetans (through the Tibetan Children’s Education Fund); the ranch and its surroundings remind all of the Tibetan elders of the vast plateaus of their homeland. I ended up going to Feathered Pipe every summer, first as a student of Erich’s, then as his assistant, and then to assist Rodney Yee, Judith Lasater and Patricia Walden. All of my teachers have taught at the ranch sometime during in their years of service. It was the only retreat of its kind back in the ‘80s and ‘90s, and even today it’s the only place I know that provides such a deep, welcoming sanctuary and hearth of the Earth and Mother Nature. 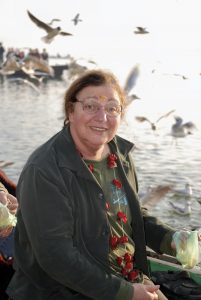 My first trip to India was arranged by India Supera. She invited me to lead a yoga retreat there and my reaction was, “Seriously?!?” I had never even been to India, and now she had the confidence that I could host a retreat in this ancient seat of so much art, science and religion—not to mention yoga itself. Holy moly! I was thinking of bringing a group to Cambodia but now it had somehow morphed into a journey to the Seven Sacred Sites of India. I had no idea what I was getting into, but when India Supera asked me to lead the group, I agreed.

Imagine taking your first trip to India, with 24 students and 17 stops in 16 days. Thank Shiva that India Supera’s daughter Wintersong was also on the trip to provide moral and logistical support. On that trip, Wintersong began her practice of yoga and I began my love affair with India, the country. My love for India, the woman, was already deeply rooted in my soul. We laughingly called our second and third trips “India Squared,” because a journey to Mother India with Ma lndia would always be more than double the fun—and challenge—and guaranteed to be among the transformational journeys of a lifetime.

It’s amazing how much knowledge, advice and resources an experienced mentor can share. As my mentor, India became a deep source of wisdom, faith and encouragement. Each of us develops at our own pace, yet this type of supportive influence can have lasting positive effects. I attribute much of my personal and spiritual growth to the guidance of India, who challenged me to think differently and be open to many different perspectives. 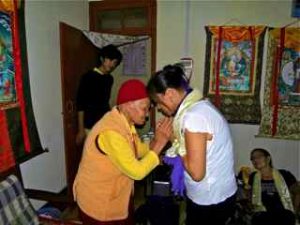 IN GRATITUDE TO MY TEACHERS

Thank you for changing me.

Just love all, feed all, serve all, as Baba has always asked of us.
Just love.

It will make the earth a better place for you and all of us.

A good teacher is like a candle –
it consumes itself to light the way for others.
~ Mustafa Kemal Atatürk