Happy Year of the Pig

Here’s wishing you and your family good health, prosperity and happiness for the Year of the Pig.

Chinese New Year, 2019, arrives on February 5, and it is the Year of the Female Earth Pig. 豬. Chinese New Year is also called Lunar New Year and Spring Festival, and is the most important holiday for Chinese people around the world. On this day, 22 out of every 100 people on earth will stop what they are doing to celebrate!

Astrology is integral to Chinese culture. The animal signs are found in stories and folklore all over China and Southeast Asia. This system of designating years with animal signs in a 12-year cycle, following the lunar calendar, has been used for centuries.

Your birth year signifies more than your age. People are 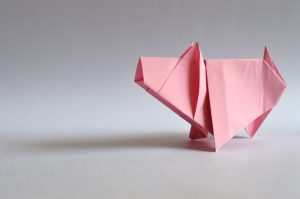 believed to have attributes of their astrological animal, which could either be a help or a hindrance. It’s believed astrological animal signs have a profound influence on personality, relationships, and destiny. Animal signs are used to determine fortune, career path, business prospects and much more. In ancient times, people cited astrological compatibility in seeking relationships—both in business and romance—and in some areas today people still refer to it.

Surprisingly, your animal-sign year (本命年—ben ming nian) is not automatically considered lucky. Rather, it is a hurdle, and to protect from bad fortune you are supposed to wear red every day for the entire year. Even in our modern technologically advanced times, it’s still a custom among everyone from elders to youngsters. Chinese culture, pigs are associated with abundance and wealth; their cute faces and big ears are signs of good fortune. They symbolize diligence, compassion, and generosity.

Chinese New Year celebrates giving over receiving. During the Chinese New Year, we wish prosperity, happiness, and success to everyone around. We celebrate by giving one another packets of candy, money and other small gifts.

Figuring out your age according to the Chinese lunar calendar can be a little tricky. For example, if, like me, you were born not long before the Chinese New Year, your birthday will remain in the previous year. I was born in January, 1961, before Chinese New Year, so technically I am part of the previous year (1960). This means I’m a Wood Rat and my next birthday, in January, 2020, will mark the completion of a full astrological cycle of twelve animals and five elements, meaning I’ll be 60. In the Western calendar, though, I’ll only be 59!

I wish you a year full of the beautiful traits of the Pig —
kindness, good temper, honesty and happiness

HERE is a chart to find Your Birth Year Animal