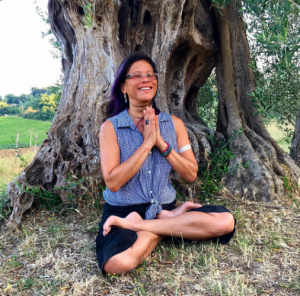 Over the past 25 years, Cora Wen has built her reputation as an internationally acclaimed yoga practitioner and teacher. She is a follower of the great Indian Yogacharya B.K.S. Iyengar, who passed  in August, 2014.

Toward the end of an 11-year career in banking, in the late 1980s, Cora first began to study yoga. She apprenticed with Erich Schiffmann and assisted Rodney Yee for seven years. She assisted and traveled with Judith Hanson Lasater for 18 years, and was also mentored by Patricia Walden sice the late 1990s. Cora has also studied extensively with Ramanand Patel, Manouso Manos and the Sanskrit scholars Kofi Busia and Edwin Bryant. Her yoga practice and knowledge extend from the most advanced asanas (poses) to the full range of pranayama (breathwork), and she is well-versed in the spiritual underpinnings of yoga (Patanjali’s Yoga Sutras and the Bhagavad Gita).

In 2001, Cora started her Yoga Bloom school for training in therapeutic yoga. It follows an extensive curriculum based on her years of experience working with people suffering from various chronic and acute conditions from arthritis and joint injuries to multiple sclerosis and Parkinson’s disease and including psychological trauma, depression, anxiety, PTSD, eating disorders and addiction.

Beginning in 2002, Cora developed the Yoga Experience for AmanResorts; she has also taught Yoga for the Mandarin Oriental Hotels and the Uma by COMO Hotels and Resorts. Over the past 12 years, she has organized private yoga and cultural tours for up to 25 people in India, the Kingdom of Bhutan, the Sikkim Himalayas, Cambodia, Laos and Java.

A native of Hong Kong and educated in English-speaking schools, in Europe and the U.S., Cora has attended the University of Chicago and the University of San Francisco. She worked in fashion retail and design before joining U.S. Bank, where she managed corporate travel and purchasing for numerous Fortune 100 companies, including Lockheed Martin, Nestle, The Gap and Williams Sonoma.

Cora’s YogaBloom clothing line will be available through her websites, corawen.com and yogabloom.com later this year. She is an active presence under the name of “CoraYoga” on social media (Facebook, Instagram, Twitter), with over 25,000 total followers and a daily reach of 3,000 to 15,000. The videos on her “CoraYoga” YouTube channel have exceeded 150,000 total views.

See where Cora is teaching next

“I am filled with inspiration for Cora’s commitment and for the simple joy she radiates. I enjoy being with her as she discovers her own self on the mat and then shares it with others.” ~ Judith Hanson Lasater, PhD & physical therapist. Yoga teacher since 1971

“Cora is a gifted teacher – she has the gift of a supple body, a creative mind and most of all, a kind heart. You will be comforted by her teaching” ~ Patricia Walden, vice president of B.K.S. Iyengar Regional Association. Yoga teacher since 1976.

“Cora has worked extensively with me for years, assisting me at workshops and traveling around the country
. She’s a gem. She glows. She’s got the juju, and knows what’s happening. Breathe, bend and bloom with Cora. You’ll be glad you did!” ~ Erich Schiffmann Yoga teacher since 1970 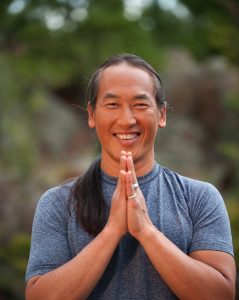 “I have not met a more enthusiastic yoga practitioner in all my years of teaching. Her love for the art and her childlike excitement for discovering and sharing yoga insights is infectious. Most people will be touched deeply by her classes and at the same time have great fun.” ~ Rodney Yee Yoga Yoga teacher since 1987 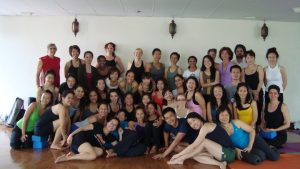 I’m committed to the practice of yoga as a pathway to real, true, sublime Happiness. An acceptance of ourselves as we are, every moment of every day. It is a light that shines its briliance onto the dark places of our lives and selves. Fitness and healing are byproducts of yoga; the actual purpose is to awaken our highest potential as human beings. I hope my classes are an environment to expand, explore and challenge your body, mind and spirit.