How Can you Resist a Butterfly? 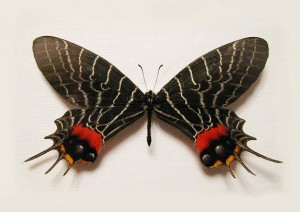 As I was researching on the web for Thanksgiving travel to Bhutan, I found this post from Yeshey Dorji in Thimphu, Bhutan.

His description on his profile stopped me along with the arresting image of the new National Butterfly of the Kingdom.

“The decadent concept of measuring success by the amount of material wealth one possesses is the sole reason why the modern society suffers from acute intellectual impotence. It is also the reason why we unfailingly take a million miles walk to arrive at the point of departure. And yet, I like to think that there is a pattern to the madness that is life. To believe otherwise is to lose hope – and to lose hope is to render life meaningless.” ~ Yeshey Dorji 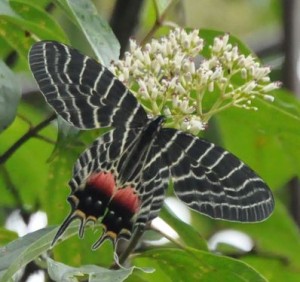 The Kingdom of Bhutan is a fabled haven for butterflies, with 90 – 120 species  and 28 of these endemic to the eastern Himalayas. Such a degree of biodiversity is available because of the wide range of habitats found in the mountainous terrain together with a  strong culture of stewardship.

Bhutan has made a well-deserved place on the biodiversity map, ranking in the top 10% of countries in species richness per area unit. In Bhutan, 26% of the country is protected land, with another 9% designated as corridors connecting protected areas. The government has left 60% of the country under forest cover.

Here’s a link to some snapshots from another Bhutanese photographer

Birds also love Bhutan so it is a prime location for catching glimpses of many unusual feathered species. The Kingdom of Bhutan has over 670 bird species identified, and the lush ecosystems promise plenty of wildlife. Snow leopards and Bengal tigers reside in high-elevation forests, and the southern tropics are home to the clouded leopard, one-horned rhinoceros, elephants and a rare primate unique to Bhutan – the golden langur.

Here’s more about the brilliant butterflies of Bhutan – click here and a link to a printable guide of Butterflies in Bhutan, found between 800 and 3,000 meters.

The new National Butterfly of Bhutan has been announced as the Bhutan Glory – Bhutanitis lidderdali, from the Family – PAPILIONIDAE and subfamily – PARNASSIINAE. The Ministery of Agriculture and Forestry sent a research team from Bhutan in collaboration with the Butterfly Society of Japan (BSJ) and NHK Japan to locate these rare butterflies. 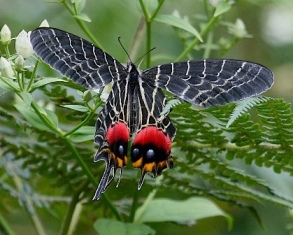 There are 6 species in the genus Bhutanitis, all large and magnificent butterflies with black wings marked with fine creamy or white lines. The hindwings of all species bear prominent red patches, greyish ocelli, and a set of 3 or 4 long spiky tails.

GREAT NEWS! We now have a national butterfly. The Cabinet, upon the recommendation of the Hon’ble Minister for Agriculture and Forests, His Excellency Lyonpo (Dr.) Pema Gyamtsho, has approved, on 16th February, 2012 the Ludlow’s Bhutan Swallowtail (Bhutanitis ludlowi) as our national butterfly.

The butterfly is truly magnificent – and very, very rare. Notwithstanding the unproven claim made by Chou that it is also found in the southwestern Sichuan province of China, it is generally accepted that the butterfly is endemic to Bhutan and is found nowhere else in the world. Even in Bhutan, it is so rare that, as of today, the Ludlow’s Bhutan Swallowtail is found NO WHERE ELSE – except in Tobrang areas of Trashiyangtse, Eastern Bhutan.

The photo below of the Ludlow’s Bhutan Swallowtail is of the sample collected by Sonam Wangdi, Wildlife Conservation Division, Department of Forestry, Bhutan and Dr. Yago Masaya, Butterfly Society of Japan, during August, 2011: 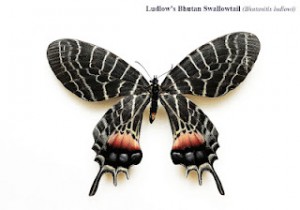 Another equally majestic and rare butterfly that is found in Bhutan is called the Bhutan Glory (Bhutanitis lidderdalii). It was first discovered in Bhutan in 1868 by Dr. R. Lidderdale. The drawing shown below was prepared and described by Mr. William Stephen Atkinson from one of the samples collected by Dr. Lidderdale from Bhutan in 1872.

The butterfly is found in Assam, Sikkim, Manipur, Nagaland, Arunachal Pradesh, Myanmar, Thailand, Vietnam and the Szechwan and Yunnan provinces of China. In Bhutan, I know that they are found in Gedu, Khaling and Pemagatshel areas.

Both of these butterflies are Swallowtails. Unless one takes a careful look, they look almost identical: 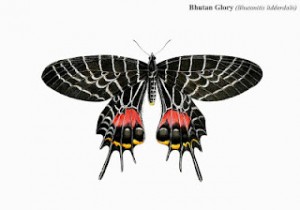