In another form of this mudra, middle, ring, and little fingers of both hands lie on top of each other ande the thumbs and index fingers of each hand, touch to form a circle, which symbolises the world of appearance and true nature of reality.

Vitarka Mudra
This mudra is a universal sign outside of its Buddhist context, and appears in Christian iconography.

Both hands are in Abhaya and Varada, but with thumbs touching tips of forefingers. The right hand is at shoulder level, the left at level of hips.

This mudra is used for images of the Great Buddhas, and symbolises one of the phases of the preaching of Buddha, of discussion or teaching of the dhamma.

The circle formed by the thumb and the index, a complete form, having neither beginning nor end, is that of perfection; it resembles the Law of the Buddha, which is perfect and eternal.

A variant is left hand rests palm up in lap, and right hand raised to shoulder level with thumb and index finger forming circle. Another form is with index finger and little fingers of both hands fully extended, middle and ring fingers curved in. The left hand points up, right points down.

Dhammacakka: Turning the Wheel of Dhamma

This mudra comes in a variety of forms. Generally, the right hand is held level of breast, palm outward, with index finger and thumb, joined at tips to form the mystic circle, touching the joined index and thumb of left hand, whose palm is turned inward. The left palm is turned in (toward body), right out, and circles formed by thumbs and index fingers of each hand touch.

It symbolises one of the most important moments in the life of the Buddha, the occasion when he preached to his former companions the first sermon after his Enlightenment, in the Deer Park in Sarnath.

This mudra is particularly steeped in the rich symbolism of the wheel in Buddhist metaphysics. Apart from Buddha Gautama, only Maitreya (the Buddha of the future) can, as a dispenser of the Law, form this mudra.

The circles made by the thumbs and forefingers represent the Wheel of Dharma, and in turn, the union of method and wisdom.

This is the mudra to particular to seated images of Buddha, with the left hand resting palm up in lap, and right hand hanging over knee, palm inward, pointing to the earth.

The mudra portrays Buddha taking earth as witness at the bodhi tree, witnessing Shakyamuni had fulfilled the discipline and duty of a Bodhisattva. Shakyamuni’s instantaneous transformation from a Bodhisattva to the Buddha is the superiority of the knowledge of the Buddha, which is pure bodhi perception and the means that enables the Enlightened One to triumph over demons.

Sometimes the left hand holds a begging bowl. This is the gesture Buddha summoned Earth as witness to realization of buddhahood, and it is a gesture of unshakability. Akshobhya (the Unshakable) is depicted with this mudra.

This mudra is made with right hand raised to shoulder height, arm crooked, palm facing outward, fingers upright and joined. The left hand hangs at side of the body.

This mudra originally sprang from natural movements. The outstretched hand is a universal iconographic symbol, and since antiquity it was a gesture asserting power. Here it is the gesture of the Buddha Shakyamuni immediately after attaining enlightenment.

It is also the gesture of appeasement made by Buddha when a drunken elephant, goaded by the malevolent Devadatta, attacked him. The Buddha’s gesture immediately stopped the animal in its tracks and subdued it. Accordingly, it indicates not only the appeasement of senses, but also the absence of fear; and it confers absence of fear on others, which is a liberating factor.

In China, Japan and Korea, this mudra of the right hand is often used in combination with another mudra made with the left hand.

This mudra is the charity of the Buddha, and is the gesture of dispensing favors.

The right hand is directed downward with palm open to the viewer, empty; fingers may be slightly bent as if to support a round object. If standing, the arm is slightly extended to the front. If seated, hand remains at breast level, a little to side, palm up, and often the other hand holds a corner of the kesa.

This mudra represents offering, giving, welcome, charity, compassion and sincerity. It is the mudra of accomplishment of the wish to devote oneself to human salvation. The open hand and extended fingers symbolise the flowering of the Buddha’s Gift of Truth.

The Varada Mudra is frequently seen combined with Abhaya Mudra,where right hand makes the gesture of fearlessness, the left of wish granting. Standing Buddha figures are often shown this way

When Shakyamuni is shown with this mudra, it symbolises summoning Heaven as witness to buddhahood. In a variant, thumb and index finger of down extended hand touch.

The Uttarabodhi mudra is called the mudra of supreme enlightenment

It is a hand gesture that evokes a sense of unshaked unity within oneself in aligning with the One source. Try holding the Uttarabodhi mudra for a couple minutes and sense the subtle energy shift. As the sun of enlightenment dawns, fears are dispelled. 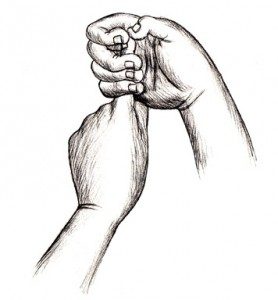 This mudra is made with the extended forefinger of one hand enclosed within the fist of the other, a Tantric gesture in Japan and Korea. The Japanese name is Chi Ken-in. This mudra is associated with Vairocana, one of five transcendent Buddhas, and stresses Knowledge in the spiritual world.

It the Mudra of Supreme Wisdom. The five fingers of the right hand represent the five elements protecting the sixth, man. One interpretation is the erect finger represents Knowledge cloaked in the illusion of the material world. Another version says the index finger is man, and the five enclosing fingers are the elements of earth, air, fire, water and ether encircling man.

Another interpretation says the erect forefinger represents Knowledge, hidden by the world of appearances (right fist). In Tibet, this mudra is perfect union between the deity and feminine power. It is unity in the manifold as embodied in Buddha.

This is the mudra of offering and devotion. It is formed by joining palms, held at the breast, fingers interlocked at the tips, right thumb covering left.

Anjali Mudra is also known as Namaskara Mudra, the oldest of Indian gestures. The word “anjali” means “two handfuls”, derived from the cupping of both hands together as if holding something within.

The gesture formed by union of the hands, is the co-existence of the two inseparable worlds, which are really one: Diamond World – vajradhatu and Matrix World – gharbhadhatu. These worlds are expression of two aspects of one cosmic life and represent the spiritual and material, the static and dynamic. The harmony of union.

This is a gesture of adoration, giving homage to a superior state, and it is never represented on a statue of the Buddha. It is a gesture, which belongs to Bodhisattvas and to give homage to Buddha or to Dhamma. It is often seen on multiple-armed Quan Yin.

Universal in India and South-East Asia as salutation, it evokes an offering of good feelings and veneration if it is made at the face. Used as a mudra, it expresses “suchness” (tahata). 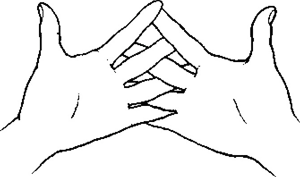 It emanates a glowing river of golden energy; soft, kind, radiant, healing, everlasting. It is the gesture of confidence in the Self, the real Self that is one with Divine energy. This confidence is centered in the heart; the bridge between personal and spiritual faith. When faith is strong, the Heart communicates strength and confidence in the Heart Self.

Vajra means “thunderbolt” or “lightening bolt” and “diamond,” and suggests something luminous, powerful and indestructible. Vajra also means the true self, and Pradama means trust or confidence. In Buddhism the thunderbolt represents the ultimate weapon against doubt. Vajrapradama Mudra symbolizes unshakable confidence and it is personal power and faith in something greater. Let go of self-doubt, mistrust of others or hopelessness in the face of obstacles.

“I come with peace because I am peace”.

Interlace the fingers in front of the chest with the palms facing toward the heart and thumbs facing upward. Open the hands away from each other creating a gentle stretch to fingers. Rest the hands on the current of energy surrounding the heart. The hands form a web and symbolises the interconnectedness of all that exists. By forming the shape of a net or web in front of the heart we acknowledge interconnectedness with all that exists and awaken compassion.

[…] next post includes more information on individual Mudras, and a review of some common Buddhist and Hindu […]

It flows in your mind.

I love how beautifully you have explained and illustrated everything. I had never tried Uttarabodhi Mantra before and it brought me such an amazing sense of energy! Thank you for sharing.

Hi, you site is beautiful and simple in same time I like it.
I try to find on the web, the Thunderbolt Mudra, I’m a yogini from the Institute of Integral of Yoga of Montreal, and some time’s I experience fear and self-doubt, in general in my life that I would like to correct this to give more to my student and my children to.
If you can send me how to practice this one it’s being helpful.
Thank you in advanced
Om Shanti

Here’s a link on Wiki for you on Vajra mudra
http://en.wikipedia.org/wiki/Mudra#Vajra_Mudr.C4.81