Sikkim, Is THIS the Last Shangri-La? 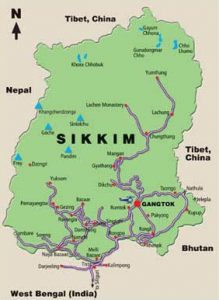 “British authour James Hilton in his novel, ‘LOST HORIZON’ introduces the concept of “SHANGRI-LA”,a mystical, harmonious valley, guided from a monastery. It has now become synonymous with an earthly paradise, particularly a mythical HImalayan Utopia—a permanently happy land, isolated from the outside world.”
Sikkim The Last Shangri La from The Eclectic Magazine

SHANGRI-LA REVISITED
Sikkim is a jewel-like mountain state of ethereal beauty, cradled deep within the splendours of the snow-clad Himalayas.  Wrapped in mists and clouds, bursting with an incredible variety of rhododendrons, wild orchids and other flowers.

Small and spectaculer, Sikkim is in the eastern Himalayas, spread below Mount Khanchendzonga/Kanchenjunga (8,534 metres), the third highest mountain in the world, and revered by the Sikkimese as their protective deity. With 7,300 sq km, measuring 114 km from the north to south and 64 km from east to west, the elevation ranges from 300 metres to over 8,540 metres above sea level.

Amidst the grandeur of the mountain peaks, lush valleys, fast flowing rivers and hills, Sikkim offers visitors a rare and singular experience. Within hours one traverses the sub tropical heat of the lower valleys to the cold and rugged mountain slopes that reach up to perpetual snow. With an excellent climate,  natural beauty and a rich cultural heritage, Sikkim is a jewel amongst the Eastern Himalayas.

Sikkim, became the 22nd state of India in April, 1975. Sikkim has been divided into four districts and each district is bifurcated into two sub-divisions. Sikkim state is a part of inner mountain ranges of Himalayas, and has a varied elevation ranging 300 to 8540 meters. Habitable areas are only up to altitude of 2100 mtrs, constituting only 20% of the total area of the state.

Spanning Sikkim’s western borders are the Khangchendzonga and the Singalila Range, a north-south spur of the Great Himalaya. The northern limits reach the Tibetan Plateau and is straddled by the Donkia Range with the eastern flank bounded by the Chola Range. Sikkim encompasses the Lesser Himalaya, Central Himalaya, and the Tethys Himalaya. Although the Great Himalaya lie in east-west, the two ridges of Sikkim’s eastern and western borders, the Chola and the Singalila, follow north-south. Across the middle, another north-south ridge of lesser elevation separates the Rangeet Valley from the Teesta Valley.

The major mountain peaks of Sikkim are

Sikkim’s two major rivers are the Teesta and the Rangeet. The turbulent Teesta, has its source at the Chho Lhamu lake in the Tibetan Plateau. It begins as a little stream but  swells into a raging river as more tributaries converge as it snakes through the deep mountain valleys in the plains of Bengal. The Rangeet has its source at the Rathong Glacier south of the Khangchendzonga massif, and meets with the Teesta at the valley dividing Sikkim and Bengal. There are many perennial lakes in Sikkim including the scenic Khechiperi, Gurudongmar, Chho Lhamu, Changu and Menmetsho high in its depths.

Wikipedia’s info and links to Sikkim 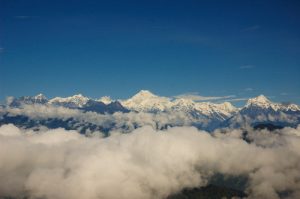 Kabi Lungtsok is where the historic treaty of blood brotherhood between Lepcha chief Te-Kung-Tek and Bhutia Chief Khey-Bum-Sar was signed ritually. The spot where the ceremony took place is marked by a memorial stone pillar amidst the dense forest.

Singiek offers one of the most spectacular views of Mt Khangchendzonga and its ranges. The area also has interesting short nature trails for one to three days along the higher ridges of surrounding hills.

Chungthang, on the confluence of Lachen and Lachung Chu and the starting point of river Teesta, is the nodal junction for two passes, Lachen and Lachung. The valley is believed blessed by Ihedu Rimpoche, and you can view the foot and palm left by the patron saint. The place is rich in bio-diversity with a large variety of orchids, plants and wild life, and is 95 km from Gangtok

Yumthang, at elevation of 11,800 ft and 140 km from Gangtok, is a paradise with fascinating flora and fauna,amidst breathtaking scenic grandeur. Yumthang’s “Tsa-Chu”, the hot spring on the left bank of Lachung Chu is popular for curative and healing power. Covered with rhododendron, this valley erupts every Spring with a colourful display.

On the way to Lachung is Singhik with the magnificent Kanchendzonga range in full splendour. Festivals and dances Sikkim’s famous mask dances provide a marvelous spectacle, a particular experience unmatched in the  world.

Sikkim Festivals
Saga Dawa : Saga Dawa – very auspicious day for the Mahayana Buddhists. On this day people go to monasteries to offer butter lamps and worship. A huge procession of monks goes around Gangtok with holy scriptures.
Phang Lhabsol : Phang Lhabsol is a festival unique to Sikkim. It is celebrated to offer thanks to Mount Kanchendzonga, the guardian deity of Sikkim and to Yabdu the supreme commander.
Kagyat Dance : Kagyat dance is performed every 28th and 29th day of the Tibetan calendar. The solemn nature of the dances is interspersed with comic relief provided by the jesters.

Dasain : Dasain the biggest and most important festival of the Hindu-Nepali population is celebrated in September – October. It symbolizes the victory of good over evil.

Foreign tourists require a special permit, which is conveniently available (for 15 days stay) from all Indian missions abroad.

Accommodation: Gangtok has plenty of hotels and restaurants covering the range of budgets. Advance booking during Durga Puja holidays is essential.

Pelling, in West Sikkim , (connected by bus to Siliguri) is opening up as an alternate destination to Gangtok. Yuksom, the starting point of the Dzongri Trekking trail, is deeper into West Sikkim. Though difficult to reach, there are two hotels: Hotel Demazong and Hotel Dzongrila. South Sikkim has Hotel Norbulingka at Namchi, a good base to explore South Sikkim.

Season: The tourist season is April to October, with a peak during Durga Puja holidays.

Tweets that mention Sikkim, Is THIS the Last Shangri-La? -- Topsy.com says: