What is Year of the Rabbit?

How Does the Lunar Calendar Work?

According to Chinese astrology, 2011 is Year of the Rabbit, beginning on February 3, 2011 through January 22, 2012.  There are 12 animal signs in Chinese astrology and Rabbit is the fourth sign. Chinese Calendar is calculated on a lunar cycle, with each month beginning on the darkest day of the new moon. 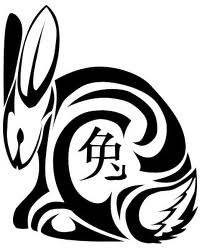 The Chinese Calendar is a solilunar calendar, integrating the revolution of Earth around the Sun with the movement of Moon around Earth. A month begins with the new moon (invisible Moon) and ends the day before the next new moon. The full moon is either on 15 or 16 of the month. The Spring Festival is on the first day of the first month of the Chinese Lunar Calendar, but the solar calendar date varies.

A Chinese year can have 12 or 13 lunar months, dependent on the number of new moons between two successive winter solstices. The year is a leap year if there are 13 months in the year. A Chinese Year (Suì, 岁) has 4 seasons: Spring, Summer, Autumn and Winter, and is sub-divided into 24 Chinese Feasts.Chinese New Year is in January or February and the date is set by a complex calculation of dual movement of the Earth and  Moon.

What is Chinese New Year

Chinese New Year is the most significant celebration of the year, and it is not assigned to a religion, so the New Year is a celebration of all peoples. Traditionally, the agrarian society didnt keep track of birthdays, but left age to be ruled by the Chinese calendar, which sought its accuracy by a complex calculation of solilunar movement. The 7th day of the New Year was “everybody’s birthday” as everyone was one year older on that day. (In traditional China, individual birthdays were considered less important than New Year’s date. Everyone added a year to their age at New Year rather than at their birthday.)

Chinese Astrology uses a zodiac of animals, and if you are interested in what your Chinese Animal sign is, check Wikipedia’s link here

The first week is a time for socialising and gaiety. There are lion dances, acrobats, theatrical shows, and many amusements. Firecrackers represent driving away evil spirits, and are set the first two weeks of the New Year. People prepare for the New Year with decorations, food and prayers.

Many people clean the home to sweep away bad luck and make way for good fortune. The 15th day of the New Year is the Lantern Festival, celebrated with festive lanterns strung on homes and in parades. 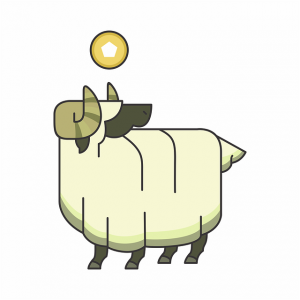 New Year stresses the importance of  family, and it is a time of reunion and giving thanks to Heaven and Earth. Look for more information about New Year Customs and Traditions here.

Who is the Rabbit?

According to Chinese tradition, the Rabbit is associated with home and family, artistic pursuits, diplomacy, and keeping peace, so 2011 could be calmer than 2010. This might be time for to find space in your life, a time for negotiation. Focus on home, family, security, diplomacy, and relationships. Create a calm and peaceful lifestyle, so there is time to negotiate problems that arise.

Metal in Chinese Astrology relates to the West, Autumn and Venus. The colour of metal is White, but it is also related to Gold. Metal adds sharpness, strength, resilience and determination to the Rabbit. Working with the ebb and flow of life is ideal for a year ruled by diplomacy, kindness and intuition.

To engage the best of Rabbit qualities, work towards connecting your body and mind. Attract the gentle blessings of Rabbit by creating space within yourself, and space in your life to welcome this abundance. This would be an ideal time to begin Yoga and connect to the flow of movement, energy and inner guidance.
Try Restorative yoga or a gentle Therapeutic sequence. Get a bolster, and try this calming and rejuvenating  Yoga Sequence

Trust the gentle nature and wisdom of Rabbit, and let go a bit. Discover opportunities to nurture yourself through conscious breathing. Become aware of the shift in brain and body chemistry as the movements of breath, energy and  attention bring you into stillness. Listen to your inner wisdom and find compassion for yourself and others. Yoga cultivates presence of mind, increased concentration and acceptance

If you’re already committed to a yoga practice, Yay! If not, this is a great time to hop in. Sasangasana, Rabbit, or Hare pose helps headaches and general tension around the head and neck. It is can also help mental and emotional overload. Begin in cat pose, and place the top of the head gently onto the floor in front, as thought you were going to a do a somersault, But don’t. Gently “massage” your neck and head by rolling it backwards and forwards on the floor, and return to child’s pose.

Rabbits are relaxed, reliable, trustworthy and easy-going. In Chinese folklore,  Rabbit is the Jade Rabbit or Moon Rabbit, companion of  the moon goddess Chang’e ( 嫦娥), constantly pounding the elixir of life for her on the moon. If you look at the moon you can find ‘the rabbit in the moon’.

Rabbit is the symbol of the Moon, and in the Year of the Rabbit, the wish-fulfilling aspect of the Sun and Moon is multiplied. The Moon is the Yin of Heaven, signifying magic and good fortune. The Moon Goddess Chang’e has a rabbit as companion, whose gentle nature is able to match her noble beauty.  Rabbit represents hopefulness, tenderness and beauty.  Newborns are given paintings of children and rabbits, as a wish the child will have a peaceful and happy life.

The Moon Goddess Chang’e 嫦娥 and her husband Houyi were immortals living in heaven. One day, the ten sons of the Jade Emperor transformed into ten suns, causing the earth to scorch. The Jade Emperor summoned Houyi for his legendary archery skills,  who shot down nine of the sons,  sparing one to be the sun. 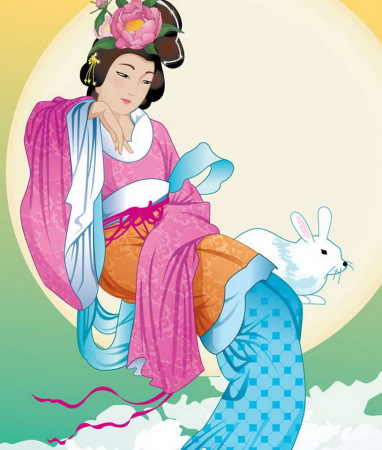 The Jade Emperor was not pleased with Houyi’s solution: nine of his sons were dead! As punishment, the Jade Emperor banished Houyi and Chang’e to live as mortals on earth. Chang’e was miserable over their loss of immortality, so Houyi decided to journey to find the pill of immortality so that they could be immortals again.

At the end of his quest he met the Queen Mother of the West who gave him the pill, but warned that each person would only need half the pill to become immortal. Houyi brought the pill home and stored it in a case. He warned Chang’e not to open the case and then left home for a while.

Chang’e became curious, and she opened up the case and found the pill just as Houyi returned home. Nervous that Houyi would catch, she accidentally swallowed the entire pill, and began to float into the sky of the overdose. Although Houyi wanted to shoot her to prevent her from floating further, he could not bear to aim the arrow at his beloved. Chang’e kept on floating until she landed on the moon. When she gets lonely on the moon, she has the company of the Jade Rabbit, who pounds magical elixirs.

On Full Moon nights this year, gaze at the Moon and fill yourself with its magical light. Find the power of moonlight and look for the “Rabbit in the Moon” pounding the elixir of life.

Strengthen Ch’i with the fearlessness, love and courage inside you, and tap into the power of the magical moon. And remember, whatever lies ahead, you choose your own path. Give yourself space, listen and trust your inner guidance. May this Golden Rabbit Year fill you with blessings!

For more on the Chinese New Year Traditions, click on this interview with Donna Wolf Freeman from YogaInMySchool.com

Tweets that mention Ever wondered about the Chinese Lunar Calendar and what lies ahead for 2011 and the Year of Rabbit? Read more about the Moon Goddess, Lucky Rabbit and more... -- Topsy.com says:

Year of the Rabbit is the Ideal Time to Take Up Yoga | Compass Yoga says:

[…] to CoraYoga, I found this incredible article about the Chinese New Year and this year’s sign – the Rabbit. As it turns out, this is […]

I’m a rabbit! And I’m also a teacher! I always notice the Rabbit in the full moon. I’ll try your yoga ideas at home.